Blue Tigers urge fans to come together for India! 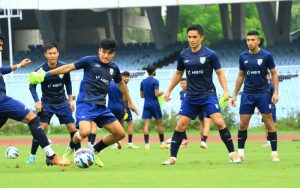 The last time the Blue Tigers played in India, and in front of the fans was in Kolkata, in the 2022 FIFA World Cup – Qatar qualifiers at the Saltlake Stadium in October 2019. The period in between has been a lull with the pandemic having rocked sporting activities all over the world. Hence, the very prospect of playing in front of the “passionate Kolkata crowd” excites all.

“Playing in front of fans is such an inspiration. We did have some fans who were allowed in a match in editions of the Leagues, but that was restricted. I understand it’s going to be crazy and super fun at the Saltlake Stadium simply because Kolkata is the hub of Indian Football. Come out and support us,” Anirudh Thapa’s eyes lit up.

It’s not him alone. Winger Ashique Kuruniyan uttered that it’s not just the fans who missed the players, but vice versa. “The pandemic cost us live sporting action in front of the fans. Not just the fans suffered, but the players have also been missing the roar from the stands. It’s time to hold hands, and walk the path together. I urge all to come to the stadium, and cheer for us,” Kuruniyan averred.

“The best part is that the Qualifiers are happening in India, and in Kolkata and we are sure that the fans will be there in the stands to cheer for us. The fans always spur us on.”

India open their campaign against Cambodia in the Asian Cup qualifiers on June 8 followed by matches against Afghanistan on June 11, and Hong Kong on June 14.

Harmanjot Singh Khabra, making a return to the Indian squad after a span of seven years, recollected some “golden memories” of having begun his career in the ‘City of Joy’.

“I have always felt at home in Kolkata. I grew up as a footballer here, and have some golden memories. I hope that I will be able to make this one memorable one in the National team jersey. The fans here are the bloodline of football. The fans in Bengal make you feel special. I am looking forward to walking out at the Saltlake Stadium again,” Khabra smiled.

Star defender Rahul Bheke expressed that the fans bring in positivity. “It’s so positive that we will finally be playing in front of our fans. The pandemic cost us the charm of packed stands for understandable reasons. It will certainly be a boost. The Kolkata fans are extremely passionate, and I request all of them to get together for India,” Bheke maintained.

At the same time, all stressed the significance of “making it count.”

“The boys have been sweating hard for almost one and half months. The sacrifices that have gone into this preparation makes it all the more significant for us as players. It’s important that we go through to the Asian Cup. We need to win the games, and qualify,” Bheke added.

Talented midfielder Abdul Sahal expressed that it’s time to “cash in on the home advantage.”

“It’s really important for us to qualify – nothing else matters. It’s one of the biggest platforms for us. We have the home advantage, and we need to make it count. The Blue Tigers bank on the fans to spur us on,” Sahal stated.

“It’s important not just for the players, but the overall ecosystem of Indian Football that we qualify to the Asian Cup. I am desperate to make this count. But at the same time, it isn’t easy. No team at the international level is ever easy. We need to be cautious, yet confident,” Khabra felt.

Despite having a number of youngsters in the squad, Thapa assured that everyone is aware of the magnitude of the next three matches. “Everyone understands the significance of qualifying to the Asian Cup. We need to be at the top level of the Asian platform in every edition. That’s the message that we are growing as a footballing nation.”

“We need to play as a team to get the result. The preparations have been really good and everyone is in good physical shape. We also had a friendly against Jordan besides some practice matches at the domestic level. Everyone is so positive, and looking forward,” Bheke quipped.