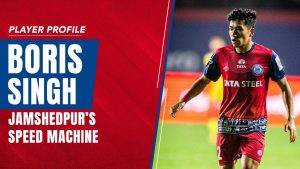 Jamshedpur FC may be going through a rough patch of form as things stand, but one man has stood out more than anyone in the club setup this season – Boris Singh Thangjam.

Boris has become a crowd favourite since joining Jamshedpur FC in 2021 from ATK Mohun Bagan, and will play against his former side as the two teams clash in Kolkata on Thursday.

The 22-year-old is expected to be a big part of the Jamshedpur FC starting lineup against ATKMB on Thursday, and it’s hard to argue against his inclusion in any side at the moment.

Boris began his youth career at the AIFF Elite Academy and soon played for the famed Indian Arrows side, but his crowning moment came when he was selected to be a part of the FIFA U-17 Men’s World Cup in 2017 on home turf.

His career may not have taken off while at ATK Mohun Bagan, but his move to Jamshedpur FC proved how good he really was, scoring twice and grabbing two assists in the Men of Steel’s famed Indian Super League shield-winning season last time around.

This campaign too, the winger has lit up the Furnace, exciting fans with his sensational speed and ability to cause problems on the flanks, making him a player to watch out for as the season kicks into high gear.

Playing against his former side on Thursday, Boris will have a point to prove, and Jamshedpur FC fans will hope that he can provide the boost needed to pull the team out of its current slump of five defeats in a row.