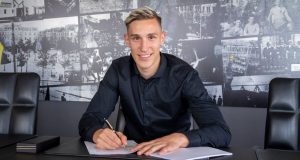 Borussia Dortmund have signed Germany international Nico Schlotterbeck, 22, for the 2022/23 season. The 1.91-metre tall centre-back currently plies his trade with fourth-placed SC Freiburg. Schlotterbeck completed his medical in Dortmund today and has signed a contract which runs until 30 June 2027.

“Nico Schlotterbeck is a young German international who has developed really well. His profile fits BVB perfectly,” said Borussia Dortmund sporting director Michael Zorc, who will step down from his post in a few weeks. Zorc’s successor, Sebastian Kehl, added: “Nico’s path reminds me a little of my own, because I also came to BVB from Freiburg at the same age as a young international player. I hope that Dortmund will become a new home for him, just as it was for me back then. Nico is not a ‘complete’ player, but rather one with huge potential. Amid interest from a lot of clubs, he didn’t pick the most financially lucrative offer, but rather chose BVB in order to further his development as a footballer. We are very pleased that Nico has made a clear commitment to Borussia Dortmund by signing a long-term contract.”

Schlotterbeck has made 53 appearances for SC Freiburg so far in his young career, while he also played 18 games for Union Berlin during a loan spell in the 2020/21 season. Last March, Schlotterbeck celebrated his first appearance for the senior national team. He is currently battling to secure a place in the UEFA Champions League with his current club. On May 21, Schlotterbeck’s SC Freiburg side will also face RB Leipzig in the DFB-Pokal final at Berlin’s Olympiastadion.

“After consultation with all parties involved, I have today decided to announce my move to Borussia Dortmund in the summer of 2022. In doing so, I want to provide clarity for SC Freiburg, Borussia Dortmund and myself personally,” said Nico Schlotterbeck, adding: “It is important for me to be able to fully concentrate on the remaining three games in the season run-in with SC Freiburg, which we hope will be successful. After that, I’m looking forward to the new responsibilities with Borussia Dortmund.”

Schlotterbeck is the second new addition to BVB’s central defence. A few weeks ago, fellow Germany international Niklas Süle signed a long-term contract to move to Dortmund from Bayern Munich.