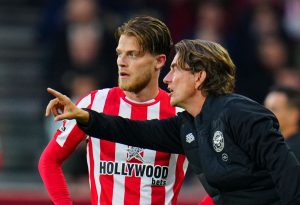 Brentford FC midfielder Mathias Jensen has signed a new long-term contract at the club, putting pen to paper on an extended deal which will run until the end of the 2025/26 season.

There is also a club option to extend his stay until June 2027.

Jensen, who recently reached the 150-game mark for the club, has been ever present for Brentford in the Premier League this season, helping the Bees maintain their position in the top half of the table at the midway point of the campaign.

He has also represented Denmark in the last two major tournaments – playing in the delayed 2020 European Championships and the 2022 FIFA World Cup at the end of last year. His 22 caps earned while with Brentford FC are a joint-club record.

Thomas Frank, Brentford FC Head Coach, said, “I am pleased to hear that Matti has extended his contract.”

“I think he has been one of our best players so far this season, after a stop-start season last year when he was unlucky with injuries and illness. He is showing what he can offer the team and the potential he has.”

“He is clearly our set-piece man, and we know he can dictate a game from the centre of midfield. I wanted him to add more goals and assists this season and he is doing that.”

“Matti’s pressing ability is very good and he has developed his defensive mindset this season, which is so important for a Premier League midfield player. I am pleased he will be part of the next stage of our journey.”

Jensen is in his fourth year with Brentford FC, joining from Celta Vigo for an undisclosed fee in July 2019, having spent one year in the Spanish top flight LaLiga.

He made his name playing for FC Nordsjaelland in his native Denmark, where he made his debut at 19 and was captain at 22.

Jensen was part of the Brentford FC team that finished third in the Sky Bet Championship in consecutive seasons, winning promotion to the Premier League in 2021.

The Bees lost the 2020 Championship Playoff final and then beat Swansea City in the same contest a year later, with Jensen starting both games.

The 27-year-old has now played 152 games for Brentford FC and has featured in 50 of the 57 Premier League matches, starting all 19 games this term. He has scored two of his five goals for the club this season, in the wins over Manchester United and AFC Bournemouth.

He has also, in the past two years, established himself in the Denmark squad, having played for his country at under-18, under-19 and under-20 level, as well as captaining their under-21 side.