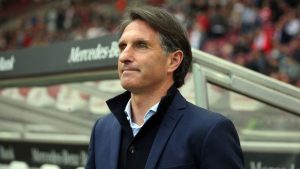 Bruno Labbadia returns to VfB Stuttgart as their new head coach signing a contract until June 30, 2025.

Bruno Labbadia said, “Everyone knows VfB are not just another club to me. I spent a very important period of my coaching career in Stuttgart for almost three years and now I’d like to contribute to VfB staying in the Bundesliga. We’ll get to work right away and get everything ready for the start of training on 12 December. We’ll quickly get an overview of the team’s performance level and work hard and with great pleasure every day to make progress.”

Newly appointed VfB Stuttgart sporting director Fabian Wohlgemuth said, “We’ll be facing a headwind in the coming weeks and months, so what we need now is experience and stability. With that in mind I’m very pleased we were able to sign Bruno Labbadia as head coach for VfB Stuttgart. Over the course of his career as a player and as a coach, he’s shown several times that he’s capable of overcoming the challenges we now face. I know him to be a meticulous professional who makes decisions calmly.”

VfB Stuttgart CEO Alexander Wehrle said, “Bruno is an experienced coach who knows the Bundesliga and has proven everywhere he’s been that he can stabilise and improve teams. We’re currently in a very difficult situation in 16th place in the table, so he has the exact qualities we so urgently need. Bruno also has a huge passion and enthusiasm for VfB, and he knows the club very well. We’re delighted that he’s decided to return to VfB.”

Labbadia was born in Darmstadt in 1956. After a successful playing career, including two senior international caps for Germany, he has worked as head coach in Leverkusen, Hamburg, Wolfsburg and most recently at Hertha Berlin. The 56-year-old was in charge at VfB Stuttgart between December 2010 and August 2013.

He will hold his first training session with the team on December 12. He will be joined by assistants Bernhard Trares and Benjamin Sachs as well as conditioning coach Günter Kern on the coaching staff.