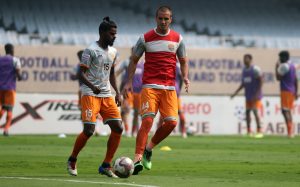 Chennai City FC will take on Sudeva Delhi FC as both teams will look to distance themselves from the relegation spot in Group B of the I-League 2020-21.

The kick-off is slated for 2pm IST at the Kishore Bharati Stadium in Kolkata tomorrow, March 6 and the match will be broadcasted live on 1Sports, whilst being streamed on 1Sports Facebook page.

Sudeva Delhi hold the head-to-head advantage going into the match as the newcomers rode on a brace from Noacha Singh to shock Chennai City FC 4-0 back in match week 6. However, since then a lot has changed as both sides are on a four-match winless streak, and will be desperate to pick up all the three points from this game.

Chennai City FC were humbled 3-0 by Aizawl FC in their last game of the first phase of the I-League. Satyasagara’s side now sit on the third position in Group B with nine points from 10 games. For Chennai City, this game is more than just three points in their fight to survive relegation as the former champions will be looking to avenge their loss from earlier this season.

Speaking at the virtual pre-match press conference, Chennai City FC head coach Satyasagara said, “We need to collect as many points to survive in the league. That is our goal. Individually, our players have been progressing well. Now the players know the importance of every game, and are working hard to win every game.”

“It is very vital we win this game. Sudeva Delhi will be high on confidence as they have beaten us earlier. I am confident the spirit will be high in both camps and I am expecting a good fight from them. It will be an interesting game,” Satyasagara added regarding their opponents.

Midfielder Rajesh S said, “There is a positive feeling within the players in the camp. We are giving our 100 per cent, and this reflects the positivity within the management and our coach. Sudeva are a good team. We faced them earlier, and the result was not in our favour. But, now we are working hard and will give our best to get three points from this game.”

Sudeva Delhi, who are immune to relegation, come into the clash after losing narrowly to TRAU in their last round of league fixtures. The defeat pegged them to second place in Group B with nine points from 10 games, and leading their rivals Chennai City on head-to-head. Incidentally. Chencho Dorji’s side’s last victory in the league was a 4-0 trumping over Chennai City, and he will be hoping his side puts up a similar performance tomorrow.

Speaking at the virtual pre-match press conference, coach Chencho Dorji said, “There is always room for improvement no matter how good a team is. We have a lot of positive takeaways from the first phase of the I-League, but we still have four games remaining and I am hoping for positive results from them.”

“We want to win all the remaining games, but sometimes things do not go in our way. But we always approach every game with the intent to win. We are still a young team, and it is important that we keep learning new things every day.”

“Anything can happen in the next game. In the reverse fixture, we won the game 4-0. However, we cannot expect the same result. All we can do is approach the game with the same mentality as we did then. We respect Chennai as a team, they have quality individuals in their team. They will also be desperate for points and will give a tough battle.”

Striker Shubho Paul, who scored the second goal against TRAU, was present along with his manager. He said, “Everything has been going really well. We know we can’t fight for the title, still, each and everyone is determined to give our 100 per cent in practice and matches. We want to win all of your remaining games.”