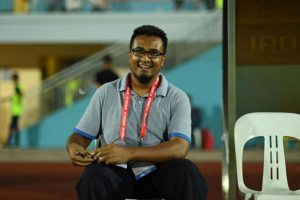 Chennai City co-owner Rohit Ramesh said, “Akbar Navas was instrumental in putting us in the Indian footballing map and we hope he joins us soon in the future and wish him the best.”

Akbar Nawas took over from head coach V. Soundararajan, formerly the clubs technical director, and he took the club from Tamil Nadu to the pinnacle of the I-League by winning the 2018/19 I-League title.

Akbar Nawas said, “My time with Chennai City Football Club has been a satisfying one professionally and personally. Together we achieved great things. Won the l-League, qualified for the AFC Cup and produced players of the highest quality, many of whom are now playing in the national team and in key cubs in the ISL.”

“Unfortunately all good things have to come to an end I will always carry my time with CCFC in my heart with great fondness.”

“Lastly, I would like to thank the entire management team, the players and specially Rohit Ramesh who’s guidance and assistance has been of utmost importance. The CCFC fans deserve a special mention, they are just great,” the 44-year-old Nawas added.