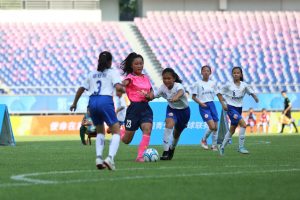 In efforts to unearth potential talents and to spread the spirit of football, the Chinese Football Association (CFA) recently launched the China Youth Football League (CYFL) which will organise various age-group tournaments in cities across China.

The opening ceremony of the CYFL was launched on July 10 and attended by officials from the Ministry of Education, the State General Administration of Sport (GAS) and the CFA.

To celebrate the occasion, three opening matches were staged for boys in the U11 and U13 categories as well as for girls in the U12 age-group.

Still in its early stage, the CYFL has already received participation from an estimate of 50,000 teams, including 24,000 female teams, with a potential of 1.2 million players joining the newly established league.

The CYFL will take place across the country with league matches organised for boys in the U8 to U13 categories as well as in the U15, U17 and U19 groups.

Similarly, the same age-groups are organised for girls, with the exception of the U19 category replaced with a college-age group, where the top eight teams will advance to the CFA Women’s League II.

CFA Vice President Gao Hongbo said: “The position and the biggest feature of this tournament is that it is open to all youth teams nationwide, regardless of their background. Through this tournament, we hope to increase the population of youth football, create a healthy environment for young players as well as provide a bigger stage for more talented players to showcase their talents.”

The CYFL roadmap, which was jointly established by the Ministry of Education, State General Administration of Sport and the CFA, was released on June 1 in conjunction with the International Children’s Day.