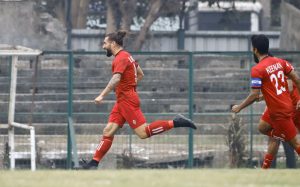 Churchill Brothers are yet to be vanquished by any opposition so far in the I-League 2020-21 and have opened up a six-point lead at the top of the table, making them the frontrunners in the race for the title. A key figure in their successful run so far has been Slovenian striker Luka Majcen, who is currently the joint top-scorer in the competition.

“I think this season is going great and our position on the table reflects that. Since the day I joined Churchill Brothers, all my teammates have treated me as a brother. I think I have bonded very well with the team and the transition has been very easy for me. We had a tough pre-season and trained really hard, and as a result, everything just clicked,” he told I-League Media.

“Before I came to India, I promised my mum and dad that I would return as a champion and top goal-scorer. So far, it is going great. I hope we will be champions!”

In his debut season in the I-League, the 31-year-old has impressed with his performances up top for the Red Machines, scoring eight goals and also being among the league’s top players in terms of key passes and aerial challenges.

His successful partnership with Honduran forward Clayvin Zuniga has been one of the biggest talking points of the season so far and the Slovenian revealed that he had done his homework on Zuniga and knew that they would form a lethal pair.

“There is no secret or special formula (for the chemistry with Zuniga). Before I came to India, I watched his highlights and watched the way he plays the game. I knew we would click on the field. We shook hands with started on the training ground when we first met and worked in pairs on different drills, trying getting to know each other,” he recalled.

“I’m very happy as a striker. My job is to score goals and help the team. The more goals I can score, the more I can help the team. Any day, I would put my team’s success over my personal success. So, I would rather wear the champion’s medal first, and then be happy to finish as top scorer,” Majcen quipped.

ker looked back at his journey in club football, with his trip to India being the first time that he has stepped out of his home country to play professionally, and expressed his gratitude to have played with the likes of Jan Oblak and Josep Ilicic, both superstars in Europe’s top leagues.

“It has been a long journey from Slovenia to India. I think I have played for 12-13 years in my country since I made my debut when I was 18 years old. I am very happy that I did not quit playing football. There were a lot of good times and bad times. But, that’s football. I play football and do what I love.”

“I have played with a few good teammates throughout my career like Jan Oblak (goalkeeper for Atletico Madrid) and Josep Ilicic (forward for Atalanta). It’s always fun to remember these kind of things. I have always wanted to play outside my home country and I am really happy that it finally happened. When I got a call from Churchill Brothers, I did not hesitate and took up this lovely opportunity.”

Majcen also shared his thoughts on living in the bio-bubble and said that adapting to the new set-up has been a key factor in the team’s success.

“I like to stay indoors in my free time, so for me, it (bio-bubble) is not much of an issue. If your mind is in the right place, this is the perfect time for all players to get better, get fit and be a better person. You have enough time to work on yourselves and I think staying in five-star accommodation is not really that bad!” he smiled.

“I did not know what to expect. The first week or so was a bit of an eye-opener because we had to adapt to a particular schedule. But, we all understand that this is all unprecedented, so we are all trying. The federation, the whole team – players, staff and management have adapted, and the table says it all. We adapted the best!”