Churchill Brothers host Sreenidi Deccan FC as they look for their first win! 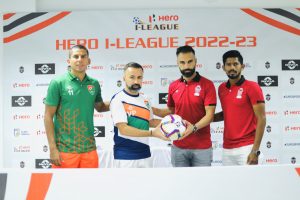 Churchill Brothers will take on Sreenidi Deccan FC in a second-round tie of the I-League at their home GMC Stadium in Bambolim on Sunday, November 20.

Seasoned defender Raju Gaikwad agreed with the coach’s views. “Losing the match was disappointing, but I do believe every player played their part to the best of their abilities. Unfortunately, the result was not in our favour. We are working hard to improve on errors we committed. It is very important to stay positive,” he said.

Rueda is looking forward to register Churchill Brothers’ first win against Sreenidi Deccan FC. “Sreenidi Deccan are a good team, they have very clear ideas and have a bunch of committed players. It will not be easy to break their defensive line and block their attackers,” he felt. On the tactics and strategy for the next game, Rueda said, “I think that if we play our natural game, with our without the ball, we can win the game, but it won’t be easy,” he warned.

Sreenidi Deccan had faced Churchill Brothers on two occasions previously, winning once and drawing on the other. Lalromawia who scored an add-on time winner the last time Sreenidi Deccan faced Churchill Brothers, won’t be available for tomorrow’s game, according to head coach Carlos Vaz Pinto. “Lalromawia is not available, he got injured last week against Punjab,” he informed.

“Churchill have a lot of expectations for this season, they want to fight for promotion to the Indian Super League. They have good players and a good coach and we expect a difficult match,” Pinto commented on their opponents. David Castaneda, who was the top scorer for the club last season, praised the opponents saying: “They are a very strong team, we know they lost their first game but we know they have good players.”

It will be a second away game on the run for the Deccan Warriors as they come to this fixture following a 2-1 defeat at the hands of RoundGlass Punjab FC. The head coach Pinto expressed his disappointment by saying: “Against Punjab, we played well but didn’t get the result. I am not happy about the result but of course, we have to learn from the mistakes we committed and we need to push things up.” The Columbian Castaneda added: “This week, in the practice sessions, we tried to fix our mistakes and now we are ready for tomorrow’s game.”

The match is scheduled to start at 4:30pm and will be broadcast live on Eurosport and DD Sports, and streamed live on the Discovery+ OTT platform.