Clash of Titans in the semifinals of the Senior Women’s National Championships!

Press Release 2018-02-11 General Comments Off on Clash of Titans in the semifinals of the Senior Women’s National Championships! 900 Views 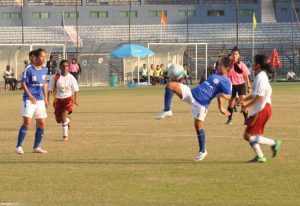 The 23rd Senior Women’s National Football Championship 2017/18 has reached its business end with the four deserving teams of Tamil Nadu, West Bengal, Railways and Manipur set to battle it out in the semifinals tomorrow, February 12.

The tournament currently underway in Cuttack, Odisha has been one of the most competitive the tournament has seen so far its history. Every team still in fray can stake a valid claim for the right to be called national champions this year and this is what makes it even tougher.

The first semifinal sees Tamil Nadu square off against two-time winners West Bengal. While Tamil Nadu will be looking to make their maiden final, Bengal on the other hand will aim to reach their 16th final.

Tamil Nadu topped their group, before edging out title contenders and hosts Odisha in the quarterfinals. The team has exceeded expectations and is raring to go further. “We are keen to make our maiden final. The girls are excited to prove themselves tomorrow,” revealed Tamil Nadu head coach M. Muruhuvedan.

Meanwhile, West Bengal have been impenetrable in the tournament with teams like Punjab, Mizoram and Himachal Pradesh falling by the wayside. Their defence hasn’t conceded a single goal and will prove to be a tough nut to crack for the aspirational Tamil Nadu side.

“The girls have been focused throughout and we want to continue doing that. Our goal is simple. Win,” quipped Pratima Biswas, the head coach of the West Bengal side.

The second semifinal will be witness to the finalists from the last two editions fight it out to make the final. 18-time champions Manipur and the last team to beat them in a final, the Railways.

The defending champions and eternal favourites Manipur have been on a rampage, with the team scoring an astounding 35 goals so far. Having won and quite a number of India regulars on their ranks, the team is highly confident of making another final.

Head Coach Surmala Chanu showed complete faith in her team when she said, “Winning is a habit. If you don’t play like champions, you cannot be champions and that’s how we are going to take the field.”

But even the best laid plans can go to waste, as showed by the Railways two years back when they beat Manipur in the final. After topping their group, they grinded it out against a tough Delhi side and are now on the cusp of making their third final in a row.

“Our team has come here with one objective, and that is to be the champions. And for that we need to reach the final,” stated Kuntala Ghosh Dastidar, the head coach of the Railways side.

All in all, it is set to be an action packed day in Cuttack with two tough clashes in what has so far been a well fought Senior Women’s National Football Championship.