Croatia: Launch of One Family campaign to combat racism!

Press Release 2023-01-16 Europe Comments Off on Croatia: Launch of One Family campaign to combat racism! 175 Views 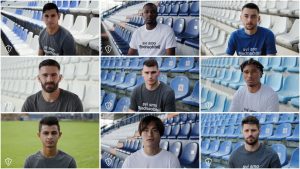 The Croatian Football Federation (HNS) has launched a new promotional campaign that features star players from domestic clubs and focuses on promoting tolerance and stopping racism and discrimination.

All of the players who participated in the videos voice the same message in their mother tongue: “We are one family.”

“I’m very proud of the excellent collaboration between the Croatian FA and our various clubs during the making of this campaign, which I believe is a real testament to the fact that the entire Croatian football family shares the belief that racism is not welcome at our stadiums and that all forms of discrimination are unacceptable,” said the HNS president, Marijan Kustić.

The One Family campaign will run across television channels and social media during the forthcoming months, and it comes as part of the HNS’s broader decision to invest all the money collected from fining clubs for discriminatory or racist fan behaviour into preventative actions.