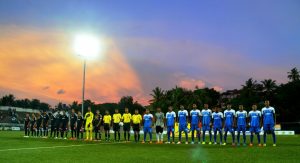 The curtains came down on the prestigious and historic Bandodkar Gold Trophy Football Tournament earlier this week with the finals being played under floodlights for the very first time at the Duler Stadium. Pune FC beat local favourites Dempo SC, and in the process became the sixth outstation team to lift the coveted trophy, played for the first time in more than two decades.

The last few days of the football calendar season saw teams battle it out for the prestigious trophy gifted to the Goa Football Association by the State’s first Chief Minister Dayanand Bandodkar in 1970. In an effort to revive the legacy and glory of the traditional tournament, the Goa Football Association stepped in to organize the Bandodkar Gold Trophy Football Tournament supported by the illustrious Bandodkar family and marketed by Zest Concepts, a sports marketing firm based in Goa.

The Bandodkar Gold Trophy 2016 was rebranded and repackaged in a new avatar – as an Under-21 tournament this year with the aim of becoming India’s premier U-21 football tournament in due course. The tournament kicked off in the third week of May and saw six teams from Goa – which included the big four of Salgaocar FC, Sporting Clube de Goa, Dempo SC and Churchill Brothers SC as well as two sides from Pune – DSK Shivajians FC and Pune FC. The matches were played at Duler Stadium, Mapusa in north Goa and Navelim Football Ground in south Goa.

Buoyed by the success of the tournament Elvis Gomes, Goa Football Association president, said, “The Bandodkar Gold Trophy Football Tournament is a crucial part of the history and legacy of Goan football. GFA has revived this traditional tournament of significance with the support and encouragement of the Bandodkar family. The Bandodkar Gold Trophy Football Tournament will be an annual fixture on the state’s football calendar and we are looking to better it with each passing year. We have ambitious plans and will look to roll them out next year. We have been approached by international teams and we will begin work on the same right away. So many tournaments we have grown up on have ceased to exist – Rovers Cup, Stafford Cup, etc. The response of the public to this tournament shows that there is a market for quality football, and the same has to be packaged well.”

Savio Medeira, former coach of the Indian National Team and Captain of Salgaocar SC who captained the team to victory at the Bandodkar Gold Trophy Football Tournament in 1992 agrees. He added, “The revival of the tournament is certainly good news for Goan football and for players from teams all over India. This tournament revived by GFA offers a ready platform for U-21 which is a positive development for young talent. We need more tournaments such as these which encourage players in the U-21 category.”

Savio’s ex-colleague and another former winning captain, Arjuna awardee, Brahmanand Sankhwalkar who lifted the prestigious trophy with Panvel SC in 1974 had the following to say, “During our time, we used to look forward to Bandodkar Gold Trophy as it was one of the premier tournaments in India. We used to approach the tournament with all the seriousness. The tournament this year was a step in the right direction.”

Sports enthusiast Alexander Fernandes who follows Indian football, said of the tournament, “The U-21 format is excellent for our players as it is a good platform to showcase young talent. The quality of the game is just as good as it was earlier. Players today in fact are better equipped with facilities and infrastructure. The quality is definitely there but we can still do better. We need to encourage more tournaments like this. Even the big leagues should organize tournaments under this age group.”

Prior to the final kick-off, the floodlights were commissioned at the Duler stadium at the hands of the Deputy Chief Minister of Goa, Adv. Francisco C.A. D’Souza. The venue which makes for great football viewing by virtue of the proximity of the stands to the playing arena is coincidentally the first venue in North Goa to have a floodlit facility and should host plenty of top flight competitive matches under lights in the future.

The Goa Football Association along with marketing partners Zest Concepts also organized a motorcade that was flagged off from the GFA office in Panjim to the Duler Stadium, wherein the trophy was escorted by armed guards and accompanied by the President of the Goa Football Association, Elvis Gomes, Sameer Kakodkar, and the former winning captains, Arjuna awardee, Brahmanand Sankhwalkar, Oscar Rebello and Camilo Gonsalves preceded the finals. One of India’s top anchors, actors and singers, Vandana Vadehra hosted the finals and mesmerized the audience with her scintillating voice. The motorcade was led by 25 riders from the Harley Owners Group (HOG), Goa Chapter whose Director, Prapanch Ravi had the following to say. “It is a matter of great pride and prestige for us to be involved with one of Goa’s most prestigious football tournaments, more so since the Bandodkar Gold Trophy has been revived. We are delighted to have been able to contribute in our own little way towards the success of the event.”