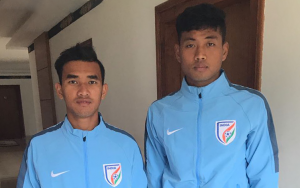 Indian Super League franchise Delhi Dynamos has signed India U-19 stars Thongam Kishan Singh and Moirangthem Jayananda Singh ahead of the start of the ISL – Season 4. The defensive duo is currently on international duty at the ongoing SAFF U-18 Championships in Bhutan and will join the team next month.

18-year old Jayananda has previously plied his trade with the AIFF Elite Academy, DSK Shivajians and has also led the India U-14 and U-16 sides. The versatile defender who can play either as a centre back or as a full back and was part of the Indian side that won the SAFF U-16 Championships.

Joining Jayananda at the capital based side will be his international teammate Kishan, who has moved steadily through the ranks. The 18-year old left back has represented the India U-14, U-15, U-16 and was also part of the side that won the U-16 SAFF Championships.

Previous India U-16 coach Bibiano Fernandes: We believe that we can qualify on merit!
Next India U-17 coach Luis de Matos: All games winnable in football!