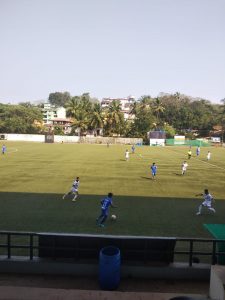 Goals from Pedro Gonzalves and Beevan D’Mello gave Dempo SC a well-fought 3-1 victory over Panjim Footballers as captain Beevan D’Mello stole the show with his quick brace, pushing the Eagles into second place of the Goa Pro League.

The Eagles who were the designated home team for the second game running were forced to make changes to their backline; Shubham Malvankar (Right Back) slotted in for the suspended Edwin Viegas while Alber Gonzalves took his place in the Right Back position. In the Half Line Ariston Costa took the place of the Injured Nigel Fernandes.

A well contested initial fifteen by both teams gave way to a long spell of Dempo SC pressure. With the next thirty minutes being played almost entirely in the Panjim Footballer’s half, the Eagles dominated possession in and around the box.

Efforts from Richard Cardoz, Danstan Fernandes, Beevan D’Mello and Shallum Pires came the closest to earning the lead for the Eagles but it was not meant to be; Richard’s & Danstan’s shot narrowly missed the target, while Shallum’s freekick & Beevan’s Volley were not good enough to earn the side a lead.

As extra time quickly approached, it was Panjim Footballer’s who – much against the run of play – took the lead in the dying moments of first-half regulation time as both teams broke for the break with the visitors the happier of the lot.

Trailing by the singular goal at the break, Dempo head coach Samir Naik opted to inject fresh legs into the match from the get-go! Latesh Mandrekar and Ariston Costa gave way for Suraj Handkokar and Pedro Gonzalves respectively. Starting the better of the two teams by some distance, the Eagles created chance after chance in the opening minutes of the second half, as the game seemed to reflect the proceeding of the initial forty-five. Still trailing with nothing to show as the clock ticked on, it was captain Beevan D’Mello who changed the game on its head in the space of three minutes, a quick brace by the forward changed the entire game in Dempo’s favour!

As Panjim Footballers pushed on for the equalizer, it was Dempo’s turn to grab a goal against the run of play! When Beevan D’Mello was brought to the ground outside the box, it was Pedro Gonzalves who stepped up to deliver. Catching the goalkeeper off position, he curled in a beautiful freekick into the near post, earning him his first of the season and Dempo’s third of the game.

The match ended 3-1 in the Golden Eagles favor with the Eagles now moving into second place in the Goa Professional League standings.