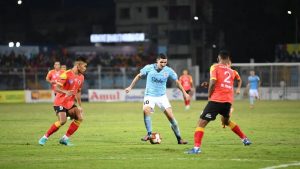 Mumbai City FC were narrowly lost out to East Bengal FC in a goal-fest that ended 4-3 in the favour of the Red and Gold Brigade. The Islanders, who had already sealed their place in the Quarterfinal of the 2022 Durand Cup ahead of kick off, have now confirmed first place in Group B.

Mohammad Nawaz replaced the injured Lachenpa in goal and new signing Gursimrat Singh Gill made his first appearance for Mumbai City FC. 18-year-old promising attacker Mustafa Shaikh was named on the bench too, after having trained with the Islanders in pre-season.

Both Indian Super League sides started the game on the front foot as both clubs looked to exploit the space behind the defence of the opposition.

Mumbai City FC’s influential players were getting time on the ball however and were being afforded space. In the 9th minute Bipin combined beautifully with captain Mandar Rao Dessai on the left flank who crossed the ball expertly to Jorge Pereyra Diaz who headed just wide of the East Bengal goal.

East Bengal looked resolute to open their account at the 131st Durand Cup and in the 17th minute Sumeet Passi scored Emami East Bengal’s first goal of the season as he was successfully able to convert a cross from the left by Jerry Lalrinzuala which Passi placed past Nawaz to give East Bengal the lead against the run of play.

East Bengal soon doubled their lead through Cleiton Silva in the 22nd minute who scored a stunning free kick to make it 2-0 in favour of East Bengal.

However, the Islanders looked determined to pull one back as they piled on the pressure on the East Bengal defence. In the 27th minute the Islanders’ resolve to attack and to penetrate yielded in goal through a sublime strike by Greg Stewart, pulling one back for the Islanders. The Scotsman volleyed a beautiful lay off by Jorge Pereyra Diaz to make it 2-1 as the game was poised for more goals.

Despite the constant pressure from Des Buckingham’s side, East Bengal scored their third goal of the game against the run of play once again in the 34th minute as Sumeet Passi scored his second of the night. Mohammad Nawaz struggled to keep deal with Passi’s cross and the ball slipped out of his palms and into the net, giving a 3-1 lead to East Bengal.

In the 36th minute, the Islanders clawed another goal back as Lallianzuala Chhangte’s unstoppable long-range strike was too tough for Kamaljit to deal with. The Islanders clearly had the momentum behind them as the score was 3-2 and East Bengal led by a solitary goal.

Mumbai City FC’s leveled the scales in the 43rd minute as Lallianzuala Chhangte scored his second of the game and equalised for Mumbai City FC. The Islanders’ number 7 was able to power the ball past Kamaljit clinically as Bipin’s cross pinballed straight into his feet. Chhangte’s second goal of the game was his fifth of the 2022 Durand Cup, taking him to the top of the Golden Boot standings. The scores were tied at 3-3 as the referee blew the

Soon after the game got a little slow as both teams were trying to control the tempo of the game by keeping the ball but were struggling to make clear cut chances.

Des Buckingham looked to inject energy and fresh ideas to break the stalemate as he bought on Vignesh in place of Ahmed Jahouh in the 54th minute of the game and bought on Amey Ranawade in place of debutant Gursimrat Singh Gill in the 66th minute.

The substitutions resulted in the Islanders moving the ball more swiftly through midfield and in the 77th minute this led to a chance for the in-form Lallianzuala Chhangte whose side-footed effort from the right flank was parried away by Kamaljit in the East Bengal goal.

As the Islanders controlled the ball and tempo with ease in the last 15 minutes of the game, East Bengal looked to counter and exploit the space behind the Mumbai City FC defence which had pushed up. In the 81st minute East Bengal’s broke into a counter attack after Alberto Noguera was seemingly fouled on the halfway line only for Cleiton Silva to score his second goal to hand East Bengal a 4-3 lead.

East Bengal thwarted attack after attack in the final minutes as they were able to keep the Mumbai City FC attackers away from their goal and clinched on to what was their first win of the 2022 Durand Cup.

The Islanders meanwhile have sealed their spot as Group B winners and will face the runners up in Group C – potentially Chennaiyin FC or NEROCA – in the quarterfinals of the 2022 Durand Cup with the dates to be confirmed.