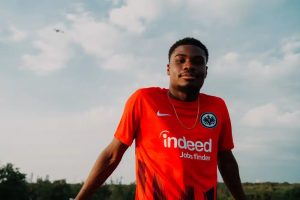 Éric Junior Dina Ebimbe has completed a transfer from Paris Saint-Germain to Eintracht Frankfurt. Dina Ebimbe is leaving the French capital after 10 years, having progressed through the youth ranks all the way up to the first team. After making his professional debut for Le Havre aged 18 and spending the 2020/21 season on loan at Dijon, he made 14 appearances in all competitions for the French Ligue 1 champions last term. Overall the 21-year-old has made 40 appearances in Ligue 1.

Dina Ebimbe, who has mainly featured in central midfield recently, brings not only physical robustness with his height of 1.83 metres but technical ability as well, which he’s also put to use on the wings in the past.

Board member for sport Markus Krösche commented, “With the signing of Éric Junior Dina Ebimbe, we‘ve managed to specifically strengthen our midfield, which means we’re well equipped for playing in three competitions. At the same time, his versatility, dynamism and reading of the game make us more unpredictable and add to our tactical flexibility. Éric Junior was able to learn a lot alongside global stars last year and we hope that he’ll soon develop his great potential on the pitch with us. He’ll be given all the time and support he needs to do that.”