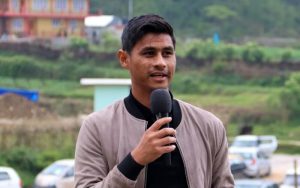 The All India Football Federation has appointed former India international and AIFF Technical Committee member Eugeneson Lyngdoh as the Honorary Project Head for the India U-17 Men’s team. The team is currently preparing for the AFC U-17 Asian Cup to be held in Thailand later this year.

“We believe that the involvement of a player of Eugeneson’s stature will be beneficial to the players and coaching staff,” Secretary General Dr Shaji Prabhakaran said, discussing the appointment.

Having made his India debut in 2015, Lyngdoh went on to earn 24 caps for the country in the Senior National Team. Lyngdoh was a mainstay of the team that won the 2015 SAFF Cup and the 2017 Tri Nation Series and was instrumental in helping India qualify for the 2019 AFC Asian Cup.

Lyngdoh was awarded the AIFF Player of the Year in 2015. At club level, Lyngdoh was a key part of the Bengaluru FC side who won the 2015-16 I-League and the 2016 Federation Cup, as well as reached the finals of the 2016 AFC Cup. After retiring from active football, he was elected to the Meghalaya legislative Assembly in 2021.

The India U-17 team is scheduled to play a friendly against the UAE U-17 team on January 16 in Dubai. Subsequently the team will play two friendlies against Uzbekistan on January 22 and 24 in Goa.