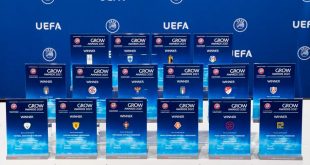 UEFA and the European Commission (EC) have teamed up for the latest round of UEFA club competition matches to kick off #EveryTrickCounts – a new public awareness campaign in which football stars and freestylers mobilise against climate change.

“This is not an issue that we can leave for future generations,” said Luís Figo, a former Ballon d’Or winner, “We need to team up and act now.”

In the video, which will be played on television, social media and stadium screens, the four players use an array of footballing tricks to show how simple changes in our daily lives can make a big difference in the fight against climate change.

“Climate change is one of the biggest challenges facing the world today,” said Lyon and France midfielder Delphine Cascarino, “We need to step up our game.”

“If every football fan makes a small contribution towards protecting the climate, it will have a large impact,” added legendary Italian goalkeeper Gianluigi Buffon.

#EveryTrickCounts sits under the over-arching Respect programme, which unites all UEFA social responsibility projects that use football to tackle either environmental and/or human rights issues.

Aleksander Čeferin, UEFA President, said, “The message of the advert is simple. It takes all of our tricks to protect the climate. We want everyone to join us and show theirs. By helping the EC deliver this message to an audience of millions, football has the potential to dramatically shift mindsets on climate change – a critical first step to getting everyone involved in creating a climate-neutral economy.”

Frans Timmermans, European Commission Executive Vice-President for the European Green Deal, said, “Football brings our continent and our planet together. To keep enjoying our favourite game, we need to win the fight against climate change, as a team. I’m delighted that UEFA and the European Commission are kicking off this campaign to assist our climate goals.”

This advert fulfils a key goal of UEFA’s commitment to the European Climate Pact, which invites communities and organisations to help the European Union achieve the Green Deal and Europe’s transition to an economy with net-zero greenhouse gas emissions by 2050.

UEFA announced its support for the Pact in December 2020, agreeing to leverage the global popularity of its elite competitions by running a joint three-year TV advertising campaign to promote the Green Deal.

Frans Timmermans, European Commission Executive Vice-President for the European Green Deal, said, “With the European Green Deal, we are pressing for the big, structural changes necessary to make our economy and society ready for a climate-neutral future. But we will not succeed without everybody tackling the issue, by taking small, individual steps like getting to the pitch or stadium sustainably, recycling the waste from our half-time snacks, or turning off a couple of lights as we glue our eyes to the match on TV. Let’s kick our bad habits, for the sake of our planet.”

By combining political leadership on climate action with football’s visibility and influence, the EC-UEFA partnership aims to inspire more Europeans to take action to save the planet.

Aleksander Čeferin, UEFA President, said, “Partnerships such as this EC-UEFA campaign show why the European model of sport is so important. We can only tackle major societal challenges like climate change if we work together in the interest of everyone.”

The campaign launch underlines UEFA’s commitment to implementing the new Responsibility pillar that the Executive Committee added to the governing body’s Together for the Future of Football strategy in April 2021.

As a first step, UEFA is developing a football social responsibility strategy composed of 11 policies with specific 2030 targets. Four of these will address climate and advocacy, circular economy, event sustainability and infrastructure sustainability.

Michele Uva, UEFA football and social responsibility director, said, “When your sport is played and followed by millions of people, your actions have an enormous impact on society, especially the young. The message that we are delivering with this television campaign is very simple. Each small gesture of responsibility helps to protect the planet. It is a responsibility that football cannot ignore.”