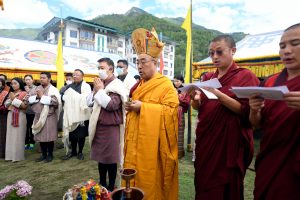 Mountainous terrain and a small population make the task of developing football a challenging one in Bhutan. But the tiny Himalayan country – thanks in part to strong support through a series of FIFA Forward projects – is now making significant progress.

In May the BFF (Bhutan Football Federation) celebrated the inauguration of their first-ever football academy for boys at Changjiji and, less than three months later, another major milestone was reached with the groundbreaking ceremony for the new BFF headquarters taking place on Monday.

Located in the Bebena area of the capital Thimphu, the new headquarters will be a three-storey building built on an area of 412 square meters. With an office area of over 1,400 square meters, the new facility will provide added space and modern amenities for the BFF including expanded offices, a conference hall, as well as a gymnasium and store rooms.

Meanwhile, a new training centre with floodlights will be constructed where the federation can conduct training courses for coaches and referees. In addition, it will also be a training ground for their Premier Division clubs of both men and women, as BFF President Dasho Ugen Tsechup said.

“Indeed, this marks another big milestone for Bhutan Football Federation,” said the BFF boss after celebrating a ceremony also attended by General Secretary Ugyen Wangchhuk and BFF staff. “With tailor-made facilities to support local football clubs, the new BFF HQ will have a big impact in developing football in the country.

“Since our local clubs are struggling with a lack of infrastructure and financial stability, the training centre and floodlights will be very crucial in the long run.

“We are very much thankful to FIFA for the generous support in developing football in Bhutan. The enormous support to small MA’s like Bhutan Football Federation from FIFA epitomises its core values.”

With a population of a little over 700,000, Bhutan is among the smaller of FIFA’s 211 Member Associations. However, the progress they have made over recent years – in terms of both infrastructure development and national team performance – is enormous thanks to the judicious work of the BFF.

Topping all, of course, was the national team’s history-making achievement in their first-ever qualifying campaign for the FIFA World Cup™ during Russia 2018 qualifiers. The team, nicknamed Thunder Boys, stunned even their own supporters by claiming a pair of victories against Sri Lanka, results which plunged the entire country into rapture.

They went on to register a stunning 1-0 win against Guam on the road to Qatar 2022 and today, the national team’s fine displays coupled by the progress made in the local leagues, has created an ever-growing fan-base with football becoming the dominant sport in the country. “Football is now the number one sport in the country,” stated Tsechup.

With the new FIFA Forward funded project underway, of course, expectations are running high in the country, with the BFF unveiling their vision of enabling every Bhutanese to participate in football. They see it as their mission to promote the game in a professional and progressive manner and to inspire the nation through success on the international scene.

“I am confident that football in Bhutan can only rise and become better,” Tsechup writes in his President’s Message. “We now have a guide to improve our overall football management over the next five years, in order that we can compete with the best in the world.”