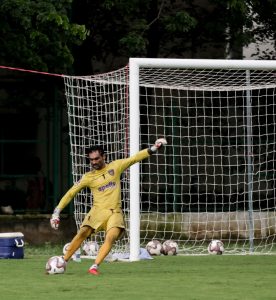 35 year old Hoshiarpur-born Karanjit Singh was a late starter into football only being scouted by former India head coach Sukhwinder Singh for the JCT Academy from where he made it to the JCT first team.

In 2010, Karanjit joined Salgaocar FC and spend six seasons with them, amongst other things winning the 2010/11 I-League title.

In 2015, Karanjit joined Chennaiyin FC ahead of ISL-2 and he went on to win the Indian Super League twice with the club in 2015 and 2017-18, starring especially in the second triumph.

Karanjit ahead of the current season was released by Chennaiyin FC and now has been signed as a free agent as a replacement for the injured Albino Gomes.

The newest member of our Custodian Union 🧤