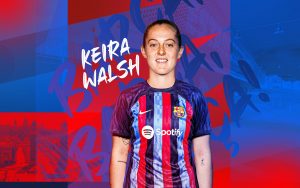 FC Barcelona and Manchester City have reached an agreement on the transfer of English midfielder Keira Walsh, who will be signing a contract through to June 30, 2025.

The player is currently playing FIFA Women’s World Cup qualifiers for her country, and will be coming to Barcelona to join her new team-mates once the international break is over.

The 25-year-old is considered one of the best midfield playmakers in the women’s game. She has been playing for City since 2014, when she was just 17, and has gone to make a big name for herself as one of ‘Lionesses’ who won the recent UEFA Women’s European Championship, being named MVP of the final against Germany.

She has won four leagues and three cups in Manchester, and has gained extensive UEFA Women’s Champions League experience. In 2020/21, she was in the Man City that Barça beat 4-2 on aggregate in the quarterfinals.