FC Barcelona to discuss “The Barça Way” at Soccerex China! 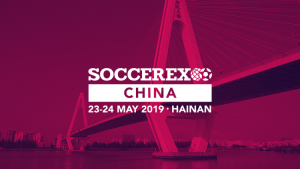 FC Barcelona Managing Director – APAC, Jordi Camps, will discuss the club’s international business plans in a one-to-one interview at Soccerex China on May 23/24 in Hainan. Camps will form part of the International Club Case Studies session, alongside City Football Group’s Chief Executive – China, Scott Munn, where the pair will share their insights into their perspective clubs’ Chinese and wider Asian market strategies; how they seek to build, engage and ultimately monetise their fanbases there.

Jordi Camps – FC Barcelona’s Managing Director, APAC – has worked in various roles for multiple companies, including sports marketing agency UP2YOU, where he was in charge of activating sponsorship deals with Gatorade, Bwin, Mail Boxes and Damm, among others. After being previously employed as Sponsorships Manager, Camps returned to FC Barcelona in August 2017 as the Managing Director, APAC.

Asia, and in particular China, has long been a priority for Barcelona which culminated in the building of the Barça Experience in Mission Hills, Haikou, which opened in November of 2018. The unique venue allows fans to learn more about the club, and includes an interactive 4,000m2 museum along with an FC Barcelona megastore, and a Barça Academy Pro with six pitches. The opening of the Barça Experience – the first of its kind outside of Barcelona in the club’s history – was attended by Board Member Didac Lee, Executive Director-CEO Òscar Grau, Technical Director Eric Abidal and Club Ambassador, Juliano Belletti; alongside Tenniel Chu, Vice President of the Mission Hills Group, various executives from the Chinese Football Association, and local authorities.

Juliano Belletti, World Cup winner with Brazil and Champions League winner with FC Barcelona, will also form part of the conference agenda for Soccerex China. From the impact of social media and digital technologies on and off the pitch to tournament expansion and the possibility of new competitions, Belletti will share his thoughts on how football is developing and what we may see next for the beautiful game.

Soccerex’s Marketing Director, David Wright, comments on FC Barcelona’s involvement in Soccerex China, “FC Barcelona is one of the most successful clubs in the history of football and is globally revered. With the opening of the Barça Experience in Mission Hills Haikou, they are perfectly placed to share expert insights with our delegates into the strategy and process of international expansion in China.”

Taking place at Mission Hills Haikou in the beautiful island of Hainan on May 23/24, 2019, Soccerex China is set to deliver unrivalled networking and learning opportunities for both domestic and international business looking to support the growth of football in China.