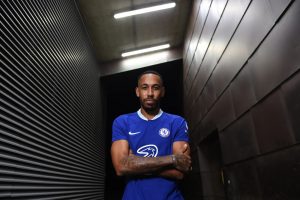 Pierre-Emerick Aubameyang has completed a permanent transfer from FC Barcelona to Chelsea FC.

The experienced forward joins the Blues on a two-year contract and becomes the sixth senior signing of the summer window to bolster the Blues men’s squad following a seven-month stay at Camp Nou. He scored 13 goals in 23 appearances for Barca last term, helping them rise from sixth in LaLiga when he joined in February to finish as runners-up.

On becoming a Chelsea FC player, Aubameyang said, “I’m really happy. It’s an honour to be part of this team and I can’t wait to start. I have some unfinished business with the Premier League so it’s good to be back and really exciting.”

Chelsea FC chairman Todd Boehly said, “Pierre-Emerick is an elite striker with a proven track record in the Premier League and his arrival strengthens our squad, giving us new attacking options. We are thrilled to have Pierre-Emerick on board with us in the new era at Chelsea and we’re really looking forward to working with him.”

Behdad Eghbali and José E. Feliciano, co-controlling owners, added, “We are really pleased to welcome Pierre-Emerick back to London as one of the final and important pieces to be added at Chelsea this summer. He’s a world-class forward and a leader, and we can’t wait to see him in blue this season.”

A pacey striker and clinical finisher, the 33-year-old is a proven Premier League goalscorer having netted 68 times for Arsenal FC over four years at the Emirates, averaging better than a goal every two games in all competitions and sharing the Golden Boot award in 2018/19 alongside Liverpool FC duo Sadio Mane and Mohamed Salah.

He won the FA Cup with Arsenal in 2020, adding to trophies collected with Borussia Dortmund in Germany and AS Saint-Etienne in France.