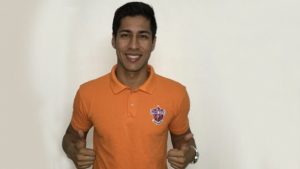 Indian Super League franchise FC Pune City confirmed the signing of Japanese-born Indian international Arata Izumi for the ISL – Season 3 earlier today. The 33-year-old spent ISL-2 with Atlético de Kolkata and made it to the semifinals before losing to eventual champions Chennaiyin FC 4-2 on aggregate.

FC Pune City CEO Gaurav Modwel welcomed the arrival of Izumi. “A very experienced and versatile midfielder, Arata stood out for me among the Indian players in ISL-2 with a tally of five goals. I am extremely excited to have him in the squad and feel he has a critical role to play. Moreover for our supporters, it’s an added joy to see him return to Pune,” Modwel said.

“Arata’s work ethic and commitment to the team he plays for is unparalleled. He is a great reader of the game and has characteristics that will integrate with my style of play. He fits perfectly into our plans for the coming season,” said Habas.

Izumi enjoyed a fine season with ATK last year and finished as Atlético de Kolkata’s second highest goalscorer with five goals. He was equally effective while setting up his teammates and also registered an assist to his name. The Japanese-born Indian footballer’s performance against Kerala in Kochi still stands out as one of the highlights from last season. Izumi came off the bench for Habas and produced one of the performances of the season by scoring a brace, including a late stoppage-time winner in a 3-2 thrilling win.

Izumi expressed his delight after joining the Orange Army. “I am very excited about playing for FC Pune City. I’m familiar with coach Habas and have also played a lot of my career in Pune FC. I am eager to connect with my roaring fans from the Orange Army. So in a lot of ways, it’s like a homecoming for me and I am looking forward to it,” he said.

Bollywood superstar and co-owner of FC Pune City Hrithik Roshan also extended a warm welcome to Izumi. “Nothing can replace experience. Arata is a seasoned campaigner with exceptional football skills and his addition will make us a formidable unit,” Hrithik said.