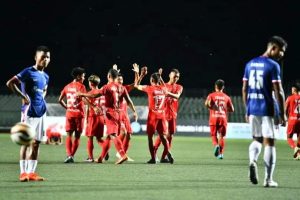 FC Venghnuai were able to pull of a 2-0 victory against Chanmari FC in a game with an ill-tempered conclusion in the second fixture of Thursday.

Chanmari FC were able to string along a series of passing moves as they manage to create the better chances in the first half. One such move resulted in the hitting the goal post.

But it was venghnuai who took advantage of their opponent’s profligacy with C. Ramnunpuia scoring a beautiful curler on the 66th minute. They soon doubled their lead after six minutes with Lalrammuanpuia scoring from the penalty spot.

A scuffle broke out between the teams late on which resulted in red cards for Chanmari FC midfielder C. Lalhunmawia and FC Venghnuai’s Lalruatfela.

Chanmari FC now have two losses after round 4 with FC Venghnuai closing in behind with five points from 4 games.