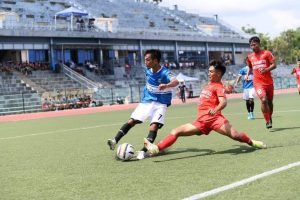 Two second half goals in a space of three minutes from FC Bethlehem ensured they finished with a point in an entertaining encounter with FC Venghnuai in their first match of MPL9.

FC Bethlehem were the team to strike first, needing just four minutes to score through a header from Lalbiakdika. Both teams exuded energy in the early stages and it was Bethlehem who came close again after the half hour mark as they struck the post.

FC Venghnuai got their break through on the 41st minute with talisman Vanlalthanga striking a 30 yard freekick into the net of Bethlehem. And they weren’t done there as they took the lead right before halftime through an opportunistic finish from Lalrempuia.

Venghnuaia continued in the same vein in the second period, with experienced MPL striker Lalrammuanpuia scoring their third from the penalty spot.

FC Bethlehem reaped the rewards of their perseverence on the 71st minute as they were able to capitalise on a defensive error from their opponents. Venghnuai goalkeeper Joel Lalramchhana was unable to deal with an aerial ball properly within his box, resulting in Lalruatpuia bundling the ball to score his side’s second goal.

And they were able to strike again in the 73rd minute with Moses Lalrinzuala applying a deft finish from within the 6 yard box to put his team on level terms.