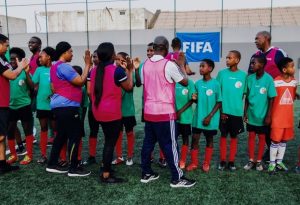 FIFA FORWARD 3.0 will be launched in January 2023, providing a more comprehensive funding and support of football development projects across the world than ever before.

Two successful iterations of the programme have been completed since its inception in 2016 with over 2.8 billion USD committed to a diverse array of plans that provide locally-relevant backing to the needs of the six confederations and 211 member associations.

The four-year cycle to the end of 2026 represents an increase in football development investment of almost 30% and is a direct consequence of the reinforced governance and financial situation of the new FIFA since 2016. A significant element of the investment will support FIFA’s goal of having 60 million female players participating in football worldwide by the end of the coming cycle.

FIFA FORWARD also supports the vision of the FIFA President in making football truly global and increasing the global competitiveness of the sport, the results of which have been evident in the recent FIFA World Cup in Qatar.

“When we launched the FORWARD development programme, FIFA embarked upon a new era of global football development that is now heading into its third cycle”, said FIFA President Gianni Infantino. “It is vital that we are now strengthening our commitment to building a stronger foundation for the growth of football.

“The new cycle will provide increased investment, greater impact through the achievement of football development objectives and continued oversight to ensure that all funds are used responsibly”, Mr Infantino continued. “We have increased this funding seven-fold but our revenues are not increased seven-fold; just that at the new FIFA since 2016 money goes where it has to go and that is back into football.”

FIFA FORWARD – rather like the organisation as a whole – is continually evolving to meet the needs of its member associations as well as those of wider society.

The latest four year-cycle will see:

As with the previous editions of the programme, a contract of agreed objectives will be finalised through FORWARD 3.0 between FIFA and each member association or confederation that will lay the foundations for the impactful and tailored development of football.

Furthermore, FIFA will continue to provide non-financial support in the form of digital tools, as well as capacity-development expertise and opportunities for sharing knowledge.

Control mechanisms are also defined in FIFA FORWARD 3.0 to scrutinise the use of the funds and report on their impact and legacy are retained.