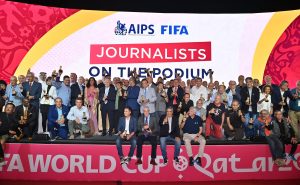 Recognising the role that the media plays in making football the most popular sport, FIFA paid tribute on Tuesday to the longevity and commitment of the journalists who have covered eight or more FIFA World Cup tournaments.

A special ceremony was held in conjunction with AIPS for the 70-odd journalists who have reached that milestone, bringing dedication, knowledge and insight to both their profession and football, and relaying the emotions of the tournament to fans around the world.

With the FIFA World Cup 2022 being played in a single city in Doha, it was a unique opportunity to bring the media together and meant that all of the journalists could attend and receive their awards – a mini-replica of the FIFA World Cup trophy — from twice Brazil World Cup winner Ronaldo, one of the greatest players ever to have graced the tournament. Ronaldo, who reached the final with Brazil in 1998, is the second-highest scorer in FIFA World Cup history with 15 goals, scored in 19 games spread over three tournaments.

The journalists included Argentina’s Enrique Macaya Márquez who has covered every FIFA World Cup since the 1958 tournament in Sweden and is now working at a record 17th World Cup, as a radio commentator — an achievement described as “incredible” by FIFA President Gianni Infantino.

He was followed by Hartmut Scherzer from Germany, covering his 16th FIFA World Cup, and Jorge Da Silveira of Uruguay, who is at his 15th.

Hartmut Scherzer recalled that, at the 1966 World Cup, it was possible to talk to players in the dressing-room after the game. “You have to imagine that today,” he said. “After the final game , I was in the locker room and talked with Franz Beckenbauer. He was only 20 years old and very shy. I asked him how it went and he answered: “I had the task to watch and take out Bobby Charlton and I think I did a great job, especially because Bobby Charlton is a very talented player”. These were the first words that we spoke to each other.

Jorge Da Silveira also commented on the huge changes his profession has undergone during his 60-year-long career. “On one hand, technology has made things much easier for those who work as journalists, but, at the same time, it has become so popular that we have more and more journalists, and the style of coverage of an event like this is different,” he said. “Before, you could interview coaches and players face to face, asking them questions, but nowadays, it’s all about press conferences.”

AIPS has previously honoured media at the Olympic Games and this was the first time it has done so at the FIFA World Cup. The journalists included written press, photographers, television and radio commentators.