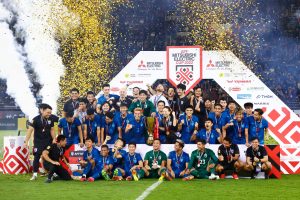 FIFA President Gianni Infantino was in attendance as Thailand retained the ASEAN Football Federation (AFF) Cup, at Vietnam’s expense, by winning the second leg of the final 1-0 at Thammasat Stadium, after the first leg had ended in a 2-2 draw in Hanoi three days earlier. The 3-2 aggregate result means that Thailand have captured the South-East Asian title for a record-breaking seventh time in their history.

The FIFA President, who watched the game alongside Football Association of Thailand (FAT) President Somyot Poompanmoung, the Vietnam Football Federation (VFF) President Tran Quoc Tuan and the AFF President Khiev Sameth, was among a capacity crowd at the second leg of the final and also took part in the medals’ ceremony after the match.

“Congratulates to Thailand on their win and well done to Vietnam on reaching the final. I am delighted to be here to watch this match, played in an amazing atmosphere. Regional tournaments such as this play a key role in supporting national team football, and they give teams such as Thailand and Vietnam the chance to play more competitive matches, which is crucial in helping football develop globally,” said the FIFA President.

“As I saw tonight, this region has such a fanatical interest in following football, and we want to transfer this passion into positive results on the field. This is why FIFA supports talent development across the world, to support the next generation of players, girls and boys, and to create the platform for them to compete on the global stage. It is happening for Vietnam’s women’s team, among others, at the FIFA Women’s World Cup 2023 and with the FIFA World Cup expanding to 48 teams, it is a genuine and achievable target for countries such as Thailand and Vietnam. This is what global football wants to see – girls and boys, women and men, club and national teams from around the world competing at the highest level. This has to be our objective, our goal.”

The competition, started in 1996 and staged every two years, is organised by the AFF for men’s national teams in South-East Asia. Eleven teams entered this year’s edition, with defending champions Thailand topping their five-team group before overcoming Malaysia over two legs in the semifinals.