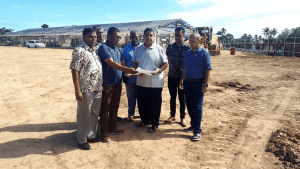 With the majority of the work already completed, Fiji Football Association Chief Executive Officer Mohammed Yusuf is confident the country’s brand new Football Academy in Labasa, which will also include a futsal court with floodlights, is on track to open early next year.

Fiji FA have two other academies including one in the city of Ba in the country’s Western Division and another in the southern capital of Suva, but this latest development in Labasa will be the first complex of its kind in Fiji’s Northern Division by any sporting code.

After inspecting the site, Yusuf confirmed the Labasa academy was taking shape and it was on schedule to be completed by the deadline.

“Together with Fiji FA President Rajesh Patel and the three Vice Presidents I visited the Northern Division last weekend with an aim to see the progress of the academy and I am happy to say that 70 per cent of work has been completed,” he said.

Yusuf said the academy would be of international standard and would help the development of players in the Northern Division.

“The academy will include a kitchen, office, playground, dormitories (to accommodate 30 players), technical room, conference hall, changing rooms and space for 250-300 people for weddings, birthdays and private functions.”

Yusuf said the academy would be worth FJD$5.5 million, with FIFA contributing FJD$4.6 million, while Fiji FA would fund the rest.

Fijian football’s best known export Roy Krishna took to Twitter to express his support for the project in his home region.

The new academy will also provide a massive boost to the game of futsal after the Fiji FA confirmed the construction of a new court in Labasa.

“The President, in consultation with the builder and consultant, have made slight changes in terms of trying to create an area for a futsal court to be constructed with floodlights so people can book and play at night,” Yusuf said.

So glad that Fiji Football is setting up an academy in my hometown Labasa which is due to open in December. Got a quick brief about their future plans & current initiatives. We definitely have a promising future ahead of us. #fijifootball pic.twitter.com/PXrNsw8MBx