Press Release 2021-12-04 Women Comments Off on Final stages of Senior Women’s National Football Championship to be streamed by AIFF! 133 Views 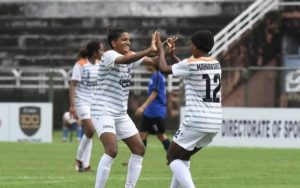 The semifinals and the final and two matches from quarterfinal onwards of the Senior Women’s National Football Championship 2021-22 will be streamed live on the Indian Football Team’s Facebook page, and Indian Football’s official youtube channel.

There were 32 teams which were divided into eight groups, with the teams in each group playing against each other for the qualifying stage. 8 teams- Manipur (Group A), Railways (Group B), Assam (Group C), Goa (Group D), Maharashtra (Group E), Odisha (Group F), Mizoram (Group G), and Tamil Nadu (Group H) has qualified for the quarter final stage which will be played on December 5, 2021. The winners of qualifying matches will play the semi-finals, with the two winners from the last four proceeding to the final.

Following are the fixtures for live streaming: