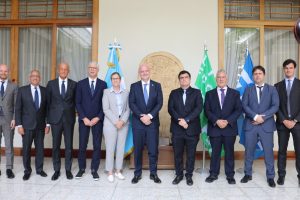 Football development in Guatemala topped the agenda as President Gianni Infantino made his first-ever visit to the Central American country.

The FIFA President met Gerardo Paiz, President of the Guatemala Football Federation (Fedefut), as well as members of the executive committee and representatives from local leagues and clubs. He visited the Fedefut headquarters, Fedefut’s High Performance Centre (CAR), which has undergone modernisation with the support of the FIFA Forward Project, the National Stadium and the futsal dome.

Gianni Infantino and the FIFA delegation later had lunch with the President of Guatemala Alejandro Giammattei.

“It’s my first visit to this beautiful country, with lots of history, lots of football, lots of futsal, lots of beach soccer,” said the FIFA President. “We are here to discuss, debate, talk and decide about the future projects for the development of football in Guatemala.”

“You have a very important job to do, and FIFA is here to support all of you, so you can implement this work. We have some very important projects here in Guatemala,” he added. “We have to work at every level, with youths, with boys, with girls.” Government support would be discussed as this was also important, he said.

The Fedefut President thanked Gianni Infantino for his visit and said FIFA’s help would be invaluable for growing football in the country.

“The visit of the President of FIFA is very important for us because it strengthens us,” he said. “Something we have worked on, and we talked about this with the President of FIFA, is the matter of infrastructure, because we know our infrastructure is not ideal, and we knew that this is a disadvantage on a global level … This is something we want to work on to see how Guatemala can improve in this sense, and this would help us greatly with our national teams.”

One early sign of progress is that Guatemala have qualified for next year’s FIFA U-20 World Cup in Indonesia.

Gianni Infantino said that Guatemalan football was entering a new era. “We want to show that after some complicated years for football in Guatemala, we have moved to a new level thanks to this new administration,” he said. “Guatemala can be an example not only in Central America, in the region, not only in North America and Concacaf, but in the whole world.”