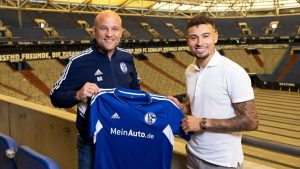 FC Schalke 04 have strengthened their squad just before the start of the 2022/23 Bundesliga season with the signing of attacker Jordan Larsson. The Sweden international, who agreed to his terminate his contract with Spartak Moscow at the end of June, has put pen to paper on a deal valid until the end of the 2024/25 season with the Royal Blues. He will wear the number 7 shirt for S04.

“Jordan convinced us during our conversations that he really wanted to join Schalke 04 and help us in our mission to stay in the league. He can play off the striker or on the wings and his qualities will make our attacking game more unpredictable,” said sporting director Rouven Schröder. “He is not only dangerous in front of goal, but also regularly puts his teammates in good positions with good play from himself.”

Schalke head coach Frank Kramer is delighted with his new attacking option, “Jordan’s way of playing football will fit right in here. He often looks to take on defenders and has the ability to beat them with his pace and technique. At the same time though, he knows how important his work without the ball is. I’m certain that he will quickly find his feet in our team.”

Schalke’s new number 7 commented, “I’m really happy that the deal is done. I’ve followed Schalke 04’s impressive progress over the last few months from afar. I’m now looking forward to being a part of the team and playing my role in us having a successful season.”

Jordan Larsson, born on June 20, 1997 in Rotterdam in the Netherlands, began his career in FC Barcelona’s academy. The son of legendary striker Henrik Larsson then moved to Högaborgs BK in Sweden in 2006 and then ended up back in the Netherlands after a spell with Helsingborg. Larsson spent a year with NEC Nijmegen before returning to Scandinavia to play for IFK Norrköping.

The forward then signed for Spartak Moscow in 2019. He scored 27 goals and made nine assists in all competitions during his time in the Russian capital. His teammate in 56 of these games was fellow summer signing Alex Král. Larsson, who has won seven caps for Sweden to date, was loaned to AIK Solna for three months in April 2022. He subsequently terminated his contract with Spartak upon returning.

Thanks to a three-year technical sponsorship agreement, Erreà Sport will be the supplier of the …