France Football dedicates its own trophy to Gerd Müller! 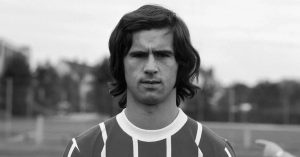 A special honour for Gerd Müller! France Football is dedicating its own trophy to the FC Bayern Munich legend, who died in August 2021. The French football magazine announced on Thursday that, starting now, ‘The Müller Trophy’ will be awarded to the best striker of the year who has scored the most goals for his club and country in one season.

Oliver Kahn, FC Bayern Munich CEO said, “The family of Gerd Müller and the whole FC Bayern family are very pleased about France Football’s decision to name the trophy for the best goalscorer after Gerd Müller. He’s the most successful striker Germany has ever produced, and one of the great centre-forwards in the history of world football. He’s an absolute Bayern legend. No one deserves this honour more than him.”

In 1970 Müller won the Ballon d’Or, also awarded by France Football. He still holds the record for the most Bundesliga goals with 365 and won the top scorer prize seven times. With FC Bayern Munich, ‘Der Bomber’ as Gerd Müller was known, won the Intercontinental Cup once, the European Cup three times, the European Cup Winners’ Cup once as well as four Bundesliga titles and four DFB Cups. For Germany, Müller scored 68 times in 62 appearances and was part of the teams that won the 1972 UEFA European Championship and the 1974 FIFA World Cup, where he netted the winning goal in the final against the Netherlands in Munich.

Previous MLS NEXT Kicks Off Third Season of Play on Saturday, September 10!
Next Manchester City announce partnership with LeoVegas!