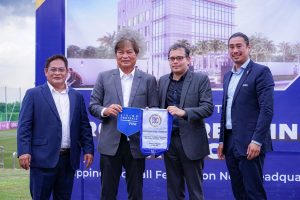 For the Philippine Football Federation (PFF) 2022 is shaping as a milestone year. It began with the women’snational team sealing maiden qualification for the FIFA Women’s World Cup™, a feat that seemed barely believable for many just a few short years ago. Now firm foundations have been put in place to secure the future of the nation’s football, with PFF celebrating the commencement of their new headquarters with a ground-breaking ceremony taking place on Saturday.

Supported with significant funding from the FIFA Forward Programme, the new headquarters will provide spacious offices with modern facilities replacing the current premises – also a FIFA-funded project built in 2007.

The new facility, based in Carmona, around 40 kilometres away from the capital Manila, sits on 4,231-square metres of land that was procured through the AFC President’s Infrastructure Initiative Programme in 2020. It is located within walking distance of the national training centre – an area that has a full-sized FIFA-funded artificial pitch and two mini-pitches – enabling the PFF to house its core football facilities close together in a single location.

In addition, the new five-storey building will provide PFF with sufficient space to expand its administration in a modern high-quality working condition, a major issue at the current headquarters for the expanding national body.

As football gains increasing popularity in the Philippines, this development marks a new dawn for the southeast Asian country which boasts a population of over 110 million.

“Today is a historic day for the Philippine Football Federation – and I congratulate you as you break ground on the construction of your new headquarters,” said FIFA President Gianni Infantino in a video message. “Your new home will allow your staff to relocate to a modern, spacious and state-of-the-art space.

“I am particularly happy to note that you have worked so closely with FIFA to reach the point you arrive at today, and this is exactly the aim of the FIFA Forward Programme: to provide tailor-made support to all 211 Member Associations, with more investment, more impact and more oversight.”

The new headquarters will provide PFF with desperately needed facilities as they aim to further develop the beautiful game in their country – a nation where sports such as basketball, volleyball and boxing have traditionally dominated.

“The project was once a dream for us,” said PFF President Araneta Jr., paying tribute to FIFA’s support. “But with the cooperation between the PFF, FIFA and AFC, we are seeing it come to life. Our space in the current headquarters is limited which poses a huge challenge for even the current personnel.

“With plenty of space, the new headquarters will make it a more conducive working and learning environment for our staff, coaches, referees and players as it would have several modern lecture and conference rooms. It is also very near to the PFF National Training Centre which is the hub of our on-field activities.”

The new headquarters are the headline project in FIFA’s ongoing support for football development in the country, following the launch of the FIFA-funded PFF Women’s League in 2018.

In addition to Philippines’ breakthrough qualification for the world’s greatest football stage, the national team underlined their heightened status just a fortnight ago, as Alen Stajcic’s charges won the AFF Women’s Championship for the first time.

And with the women’s game having made enormous progress over recent years, the new project brings fresh hopes as PFF General Secretary Gastanes pointed out.

“It [construction of the new headquarter] could not have come at a better time,” he said. “There is a heightened momentum right now for Philippine football, following the success of our women’s national team. The Filipinas’ success story is not only remarkable, it also inspires future players.

“For those in the federation, it moves them to serve the football stakeholders more. A spacious and modern headquarter will help us realise our goals, with a more productive administrative and technical staff.”