DFL rewards 106 amateur clubs for the development of professional players! 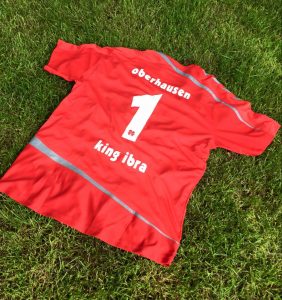 Former Bundesliga side Rot-Weiss Oberhausen have seen better times as they now only play in the fourth German division (Regionalliga West), but on Wednesday, June 1 the red-whites made a crazy and not so serious offer to Swedish striker Zlatan Ibrahimović, who had earlier stated that he will leave Paris Saint-Germain this summer.

Since then there have been speculations on where Zlatan will play next season with Manchester United under his former coach Jose Mourinho being his most likely target. So far Zlatan has not signed for the Red Devils and in a press conference of the Swedish national team, he stated that he might make a surprise move.

But that is not likely to be RW Oberhausen, who are looking for a new striker and who better than Zlatan could be that key signing for the club.

Club president Hajo Sommers told Sport1 of Germany, “In a football region like Oberhausen, there are a few things which other places wouldn’t have.”

“If he wants to expand his horizons, let him come,” Sommers added.

The club offer said that Zlatan would be offered a usual fourth division basic salary but include following add-ons:

– The Ebertbad (swimming pool), which has been shut by the City of Oberhausen, would be filled with water for Zlatan to use whenever he wants

– The local power provider will make all arrangements for Zlatan

– the typical German stadium sausage will be replaced by something Swedish

This little joke from RW Oberhausen not only made headline sports news in Germany, but has gone around the world with everyone speaking highly about this well thought out plan, which sadly won’t be happening in reality.