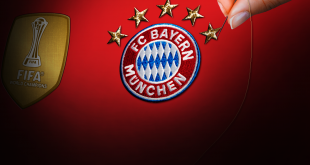 Representing the commitment of numerous football players in times of the Corona crisis, the German Football Ambassador awards this year’s honorary award to the initiators of #WeKickCorona, Joshua Kimmich and Leon Goretzka. Together they started their idea of providing immediate help for people affected by the coronavirus, and also started with a personal donation of one million Euros.

To date, over € 3.7 million have been raised and 90 aid projects in Germany have already been selected or supported. So far, the call has not only been followed by more than 2,700 private donors, but also prominent football players in Germany, such as Mats Hummels or Julian Brandt. The initiative then went international with Leroy Sané (Manchester) and within a few days there were other “Ambassadors of German Football” playing abroad, including Thilo Kehrer and Julian Draxler (Paris), Benedikt Höwedes (Moscow), Benjamin Henrichs (Monaco), Max Meyer (London) or Julian Weigl (Lisbon).

Roland Bischof, President of the German Football Ambassador e.V., said, “We honour Joshua Kimmich and Leon Goretzka with their initiative on behalf of everyone who supports this great project with their commitment to provide quick help.”

Unfortunately, the official presentation of the prize cannot take place this year at the annual award ceremony in May by the German Foreign Minister Heiko Maas, since this event also had to be canceled due to the Covid.19 virus – a replacement solution is currently being developed. Nevertheless, both initiators were delighted to have been recognized for their initiative by the award. Joshua Kimmich said, “Health is paramount and solidarity is more in demand than ever in these times. That was and is our common drive. We are grateful for the great support.” Leon Goretzka added, “This joint initiative is an expression of giving and helping each other. Exactly what is important in the current situation. We can only do it as a team.”

The honorary award of the German Football Ambassador e.V. has so far been given to personalities from football who, through their presence, have made a special mark in society and who have contributed to the positive image of Germany in the world. Last year’s winner was Bernd Schuster for his work in Spain. Regarding this year’s election, Rainer Holzschuh, who heads a top-class jury, comments, “Joshua Kimmich and Leon Goretzka took the initiative to help Corona with their own motivation and thus started a pleasant wave of helpfulness. This deserves great respect!”

In addition to Ann-Katrin Berger (Chelsea), Lena Oberdorf of VfL Wolfsburg is also unable to …