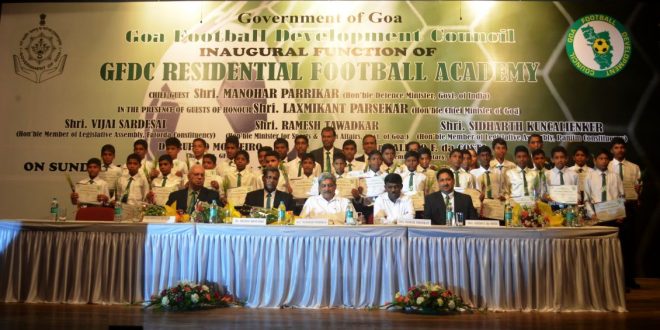 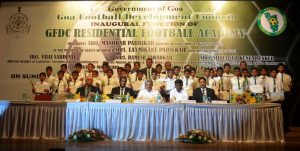 30 young boys in the age group of 12-13 years from 14 grassroot football development centres of GFDC were selected to hone their football skills at the Margao facility. Speaking at the function Mr. Parrikar stated, “As Chief Minister I gave football the status of the State Sport in Goa. Goa is the only state to declare it. The talent was there but they were not getting the opportunity. The talented sportspersons of the state will have the benefit of the Academy,” he said to a rousing reception from the gathering consisting of large numbers of GFDC trainees and their parents.

“Football matters to me the most. One must not take into account the political inclination, if any performance for the stake is concerned. I think it will be the footballers who will continue to claim the coveted place,” commented the Defence Minister disclosing that the Central Government has set aside grants of over Rs. 6 crores for the upgradation of Nehru Stadium for the upcoming 2017 FIFA Under-17 World Cup.

Meanwhile, Sports Minister Mr. Tawadkar stated that Goa will raise sports infrastructure over the next five years. “We have already seen how the Lusofonia Games brought up stadiums and the upcoming AFC U-16 Cup, FIFA U-17 World Cup and National Games will add to it,” he said. He said that Goa is witnessing improvement on the football front and GFDC is helping the budding footballers to hone their skills.

According to Dr. Rufino Monteiro, GFDC Chairman, the Academy is mainly dedicated to youngsters from villages who cannot afford training at private academies. “The academy mainly caters to children from villages. Many are not able to afford to get into a private academy. We are seeing our efforts turn into results. There are still teething problems because it is still a 4 year old baby. Our aim is to see that Goa gets its pride of place back in Indian football,” said Dr. Rufino.

“Four years ago, two people came together. Parrikar and Rufino when they met, the game of football won. The Council decided that it needed to grow from the Centres. And so we started the Pre-academies and reached the Residential Academy,” Aleixo F da Costa, GFDC Member Secretary, said.

The youngsters who are part of the academy will get their schooling from the Holy Spirit Institute and will stay at the St. John Paul II Complex. Former India and Salgaocar stopper back Roberto Fernandes has been appointed as the chief coach while former Salgaocar defender Agnelo Colaco and former Sesa Goa goalkeeper Diogo Diniz will be the assistant coach and goalkeeping coach respectively.