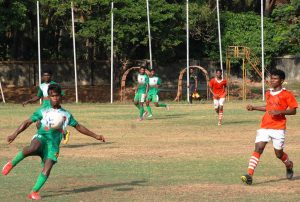 Salgaocar FC U-18 defeated their Sporting Clube de Goa counterparts in the opening fixture of the GFA U18 League’s fixture held at Cansaulim Ground. Flagan Rodrigues, Liston Colaco & Kaushik Negi were the goal-scorers in the evening’s high-octane clash.

The Greens kicked off the first half showing their intent early in the game. The Salgaocar lads combined well creating multiple chances as they threatened the Sporting goal. The Flaming Oranje despite being caught off guard early on in the game tried to make some moves on the counter but squandered possession before making a convincing attempt. The first goal was scored as the game struck its 21st minute. Flagan made it look easy as he headed in a corner floated into the Sporitng box as he beat his marker to send the bolt of a shot past the custodian. The remaining of the 1st half didn’t see much attempts being created as both teams defences stood tall & anticipated any offensive moves that were thrown at them. The score at lemon break stood 1-0 in the Greens favour.

Salgaocar began the second half as they played their usual attacking brand of football & mounted the pressure. The Oranje cracked in the opening minute of the 2nd half as they conceded a free-kick, which when Liston stepped-up & sent a sneaky shot into the far post to score. The final nail in Sporting’s coffin for the evening came as a result of penalty which Kaushik converted from the spot as he had the custodian beat. The final whistle came as a relief for the Sporting side as the score stood 3-0 in favour of Salgaocar.