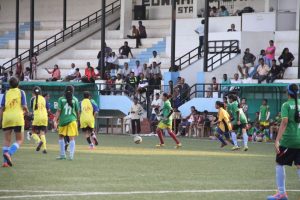 Viva North, Goa clinched the third place with ease outplaying a young but brave Gujarat’s Spectrum Football Academy 6-0 in the Goa Women’s Football Festival being held at the Duler Stadium in Mapusa this evening.

Gujarat who were without their main goalkeeper Vruddhi Raisingani, could not match Viva North skill and endurance, with most of the match proceedings being dominated by Viva North.

The Goan girls literally camped in the territory of the Gujarat girls and it was Bronya Delgado who opened the floodgates for Viva North. She capitalized off a cross from the right flank with just the Gujarat keeper Mansi Solanki at her mercy.

The next three goals followed in regular succession with 12 year old Angela Antao scoring the second goal and captain Prethi Shinde sending a beauty from the top of the box, for Viva North’s third goal. Erica Sequeria sent in Viva North’s fourth goal goal minutes before the breather.

After the breather Viva took things easy and scored another two goals the firth coming through the boots of Kusboo Saundatkar. Anika D’Souza rounded up the tally for Viva North to complete a total of six goals.

The final tomorrow is expected to produced a fiery battle of supremacy between Goa XI and the Tibet Women’s Football team, both who have earned respect among the fans in the preliminaries.