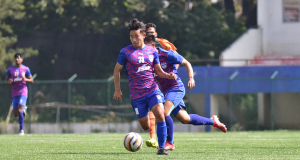 Bengaluru FC and Young Challengers FC played out a thrilling game in the BDFA Super Division League which ended 5-3 in favour of the Blue Colts. Goals from Monirul Molla, Omega Vanlalhruaitluanga, Thoi Singh (2) and Macarton Nickson sealed the three points for Bengaluru FC at the Bangalore Football Stadium.

The game started off with attacking play from both teams but just two minutes in, Young Challengers FC striker Ashwin Kumar found himself in a good position and managed to get a shot which was too much for Manik Baliyan in goal giving Young Challengers FC the lead. The Blue Colts regrouped and got themselves back in the game after 15 minutes with Monirul Molla picking up a beautiful pass from Biswa and striking it with his laces to find the back of the net to make it 1-1. Young Challengers FC took little time to take back the lead after a header from Godwin Idowu found Bengaluru FC defender Harpreet Singh, who couldn’t sort out his feet and put it into the back of his own net.

The pace of the game picked up after Omega Vanlalhruaitluanga was brought down in the box by Young Challengers FC goalkeeper Minkael Sylla and won the Blue Colts a penalty which was converted by Thoi who sent the keeper the wrong way. Just past the half-hour mark Lastborn Mawphniang threaded in a beautiful pass for Omega who was onside and struck it low and hard into the bottom corner to give the Blue Colts the lead for the first time in the game.

Young Challengers FC got themselves back on level terms after Sonam Gyalpo’s audacious attempt on target from outside the box found the back of the net ten minutes into the second half. The Blue Colts reclaimed their lead once again in the 73rd minute after Omega’s perfect pass into the box found the feet of Thoi Singh who’s shot was wildly deflected and left the keeper stranded before giving BFC the lead for the second time.

Bengaluru FC had multiple chances in the second half with Macarton Nickson and Rahul Raju coming on. The Blue Colts finally put the game to rest after the substitutes linked up with Rahul putting in the perfect cross for Macarton who volleyed it into the back of the net to make it 5-3 with only five minutes to go.

The Blue Colts next face Kickstart FC at the same venue on Tuesday, December 28.