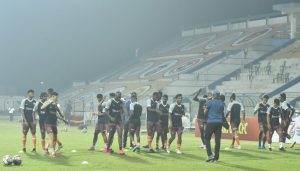 Gokulam Kerala FC would look to get back to winning ways when the Kerala-based club plays against NEROCA FC at the Kalyani Municipal Stadium on Monday, January 25.

The kick-off is slated for 7pm IST and the match will be streamed live on the 1Sports Facebook page.

A 0-2 loss against Aizawl FC in their last match sank Gokulam Kerala FC to ninth in the I-League table. With only one win and two losses so far, the Kerala-based club faces another challenge in high flying NEROCA FC.

Speaking at the official pre-match press conference, head coach Vincenzo Annese said, “We are a bit nervous defensively in the opening minutes of the match. Against Chennai City and then against Aizawl, we were not at our best defensively. We need to play with more confidence at the back and keep our composure while defending counter-attacks.”

“Against NEROCA, we have to be less nervous in defence and play compactly as a unit, because their attacking style of play is very quick and they can catch us off-guard,” he added. “Even when attacking we need to be more attentive and take our chances. We cannot get complacent in front of goal. We created three clear chances against Aizawl and since we did not take them, we lost. We cannot let this continue.”

Midfielder Mayakkannan said, “We have created chances but failed to take them and that is why we lost two matches. We need to be extremely clinical in front of goal if we are to get a positive result. We are focused on the clash and are ready to give our best.”

Sitting fifth on the I-League table, Gift Raikhan’s side would aim for nothing less than a win to propel themselves into the upper echelons of the I-League table. Speaking at the official pre-match virtual meet, Raikhan said, “We have to give our cent per cent on the field. I cannot predict the result but I can assure you that we will work extra hard to get a win against Gokulam Kerala.”

“They (Gokulam Kerala FC) are a very strong side with good attacking play and they have a lot of quality in the team as well. But I believe that we would have to be stronger than them and play with confidence,” Raikhan added.

Nathaniel Garcia said, “A win is going to help us to get into the top teams of the table. It is going to put us ahead in the table as well and given the format of the I-League, it will help us immensely to breathe a little. We are expecting nothing less than a hard challenge, but we are prepared for it.”

Previous Churchill Brothers look to consolidate position atop I-League in clash against Sudeva Delhi FC!
Next Hyderabad FC held to a goalless draw by Jamshedpur FC!