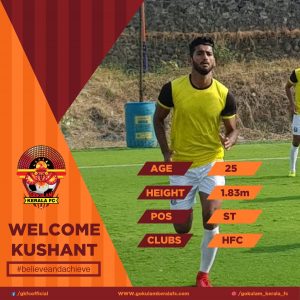 I-League side Gokulam Kerala FC have announced the signing of striker Kushant Chauhan from Second Division League side Hindustan FC of Delhi.

25 year old and six foot plus Kushant Chauhan has been a top striker in the Second Division League scoring six goals for Hindustan FC and he has had numerous call-ups for Delhi state in the Santosh Trophy.

Now Kushant Chauhan will try and prove himself in the top tier I-League at Gokulam Kerala FC, who will hope he is able to step up at a higher level of competition.