Gokulam Kerala FC taking the beautiful game forward together on the Malabar coast!

Press Release 2021-02-06 I-League Comments Off on Gokulam Kerala FC taking the beautiful game forward together on the Malabar coast! 208 Views 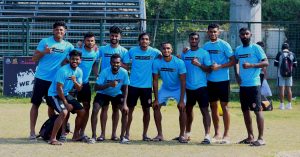 I-League clubs across the length and breadth of the country have been playing their part in taking Indian Football forward together by promoting talented local players from their catchment areas and one such club that has been doing its bit prominently is Gokulam Kerala FC.

The side from Kozhikode has been regularly promoting local players from Kerala to the I-League and as the teams fight for the I-League 2020-21 title from within a bio-secure bubble in Kolkata, Gokulam Kerala have collated a strong contingent of players from the Malabar region, which is in north Kerala. As many as nine players – Tahir Zaman, Emil Benny, Mohammed Rashid, CK Ubaid, Salman K, Shibil Muhammed, Mohammed Jasim, PA Ajmal, and Alex Saji – are from various villages from that region.

Defender Alex Saji has been one of the players who has come to the fore in recent times, having been at the club for two seasons so far. While he was playing for Gokulam’s Reserve side last season, the current I-League campaign saw the 20-year-old get promoted to the senior squad, where he has already made three appearances out of the five matches the club has played so far.

“I’ve had a very good experience in the I-League so far. There are so many senior players who we can learn from and foreign players as well. It’s a different experience for me and I want to learn as much as I can from them,” Alex said to I-League Media.

Thahir Zaman, who is another product that has come out of Koduvalli, in the Malabar region, is also getting used to life in the I-League.

“The I-League is quite different from the football that I’ve been playing earlier. While playing for the reserves, we played with local sides with local players,” said Thahir. “Here in the I-League, though, there are players from different countries and it’s a lot harder because the quality is much higher. But we are working hard, and we want to beat them all.”

‘MALABARIANS FEEL THERE IS A POSSIBLE FUTURE CAREER IN FOOTBALL’

Kerala is a state that enjoys its football and has proved the same with matches in the state seeing full galleries with fanatical support from the stands. While most of this craze for the beautiful game lies in the southern regions of the state, the north has also been producing a number of players.

“Surprisingly, volleyball is the most popular sport back in my village, as is the case in most of North Kerala. But football would come in at a close second, I guess,” said Thahir. “But there are a lot of local football tournaments that take place and they enjoy a lot of popularity. It is because of this that Malabarians feel that there is a possible future career in football and we see so many talented lads coming through.”

24-year-old defender Mohammed Jasim is another player who comes out of the region of Malappuram and has progressed from Malabar Special Police Academy through to the Kerala junior side and has even gone on to play for Vasco SC in the Goa Pro League, before joining Gokulam Kerala.

“There are so many talented players from Malappuram, and many more in north Kerala and most of them come through local football. Now, with Gokulam Kerala in the I-League, all these players have an opportunity to make a jump to the next step, if they work hard and show their talent on the pitch,” stated Jasim. “This will only help football grow in the region, over the long term.”