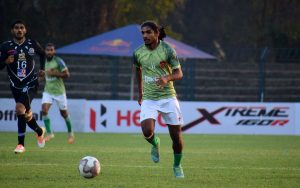 Possession of the ball has always been a key yardstick to judge teams in football. While the early stages of the I-League saw reliance on counter-attacking football, the latter stages have witnessed a stark differentiation with teams having a possession-based style of play benefitting massively. And none more so than Gokulam Kerala FC have profited from holding the lion’s share of the ball.

The Malabarians were languishing in the bottom half of the table in the opening stages of the I-League as wins came rarely. But coach Vincenzo Annese stuck with his team’s style of possession-based attractive football, which ultimately saw the Malabarians go on a three-match winning streak. They currently lie third in the table and have secured a berth in the top half of the table before the next stage begins, only three points adrift of pole position Churchill Brothers.

Annese’s style of football has also propelled Gokulam to be one of the most goal-scoring teams in the league. With 18 goals so far, the Malabarians share the most goals scored in the league with Real Kashmir FC. There is a deeper sense of intent from Gokulam Kerala’s possession, however.

The Kerala-based club has made an average of 6.1 passes in goalscoring attacks, while their duration of goal-scoring attacks is 19.7 seconds. This means that the Malabarians take their time to churn out attacking opportunities and every pass is made with a calculated move in mind.

With only two of Gokulam Kerala’s goals coming through counter-attacks, the Malabarians have had an average of 53% of ball possession and have averaged a mammoth 451 passes in one match. On average, the Vincenzo Annesse coached side makes 10 key passes in 90 minutes which could have amounted to goals and makes 32 passes inside the penalty box.

However, Gokulam Kerala’s dexterity to make the most of their possession would be all for nothing, if not for the ability of their forward Dennis Antwi to take hold of possession, once dropping deep in midfield. Antwi averaged 0.40 assists per game and has a 72% involvement in all of Gokulam’s goals. Meanwhile, midfield general Mukhammad Sharif has made a staggering 499 passes in the entire season so far. Instrumental in finding spaces, out of those 499 passes, Sharif has made a mammoth 46% in the penalty box.

Gokulam Kerala’s style of attractive football was highlighted in their 1-0 win over Sudeva Delhi FC in their last match, where the Malabarians should have won by an inflated scoreline. With Churchill Brothers next, before the final stage of the I-League begins, Vincenzo Annesse would once again look to bank on his team’s ability to keep control of the ball and getting the job done as they push for the title.