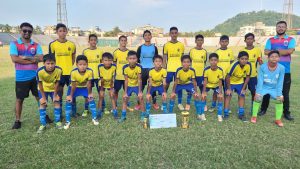 Guwahati City FC have retained their title in the GSA U-13 Football Tournament organized by the Guwahati Sports Association.

Guwahati City FC defeated Kaziranga FC 3-1 in the tie-breaker in a thrilling final held at the Nehru Stadium. Kaziranga wasted several chances to score in the stipulated time.

With this win, Guwahati City FC has qualified for the zonal round of the U-13 Inter Club League to be organized by Assam Football Association.

Abhishek Boro of Kaziranga was adjudged as the best player of the tournament while Ayan Ahmed of Guwahati City FC was awarded as the best goalkeeper.