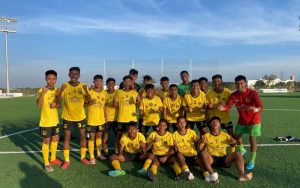 Himalayan FC Kinnaur and Classic Football Academy clinched victories in their respective U-17 Youth Cup matches to book their spots in the semifinals at the Deccan Arena in Hyderabad on Wednesday, January 25.

The remaining two Quarterfinals of the U-17 Youth Cup are set to be played at the same venue on Thursday, January 26 as Sudeva Delhi FC take on Zinc Football Academy at 10am IST, while Chennaiyin FC take on Muthoot Football Academy at 3pm IST; both the matches will be streamed live on the Indian Football YouTube channel.

It was a tightly-contested match between Himalayan FC Kinnaur and Gandhinagar FC. The side from the Himalayan foothills managed to get the early lead through midfielder Christian Lalthazuala on the 11th minute. However, Aditya Pandya levelled the scores for Gandhinagar FC just two minutes after the restart.

Things were quite even between the two teams in the dreaded penalty-shootout as well, as the contest proceeded to sudden death, where Himalayan Kinnaur finally clinched the victory 5-4.

Midfielder Gogocha Chungkham netted a hattrick, and captain Mutum Anish Singh scored a brace, while forward Khullakpam Zahir Khan and midfielder Punit Thangjam got a goal each to their name.