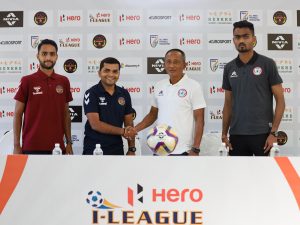 The fourth round of fixtures in the I-League 2022-23 concludes in the City of Dreams as Mumbai Kenkre FC host NEROCA FC. The match between the two sides will be held at the Cooperage Stadium on Tuesday, November 29.

Both sides find themselves in the lower half of the points table, with the hosts currently sitting on four points — thanks to one win, draw, and loss each. NEROCA have three points in their tally, thanks to a sole win in the second round of matches.

Incidentally, both teams got their only victory of the season so far against Sudeva Delhi FC. They have faced off only once in past editions of the I-League, with NEROCA grabbing a 2-1 victory in April earlier this year.

Addressing the media at the pre-match press conference, Mumbai Kenkre FC head coach Akhil Kothari spoke about possible additions to his team in the next transfer window. He said, “We are still in the process of assessing our squad and will think about new additions once the assessment is complete. For tomorrow’s match, we are injury-free and happy about it. The whole team is ready and looking forward to the game.”

Defender Al Azhar Delhiwala said, “In the previous match, it was a great experience to play our first home match in front of our fans in Mumbai. Everyone was really excited for it. For tomorrow as well, everybody is positive and approaching the match in a good way.”

NEROCA FC head coach Khogen Singh talked about the opposition and his side’s approach ahead of the fixture. He said, “We respect Mumbai Kenkre as a team and they are a very good side. For us, it is an away match as well, which poses a different challenge. We know we have to play our game and will give our best to get the three points.”

Goalkeeper Shubham Dhas said, “It’s been a great experience with NEROCA FC. The atmosphere in the team is really good and it’s wonderful to receive the affection from fans in Manipur as well. We are all set to put in our maximum effort in the match tomorrow.”

The match between Mumbai Kenkre FC and NEROCA FC will kick off at 7pm IST, and will be broadcast live on Eurosport and Doordarshan Sports, and streamed live on the Discovery Plus OTT platform.