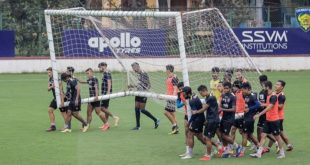 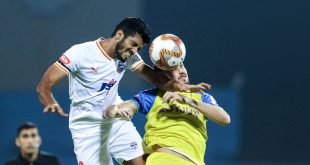 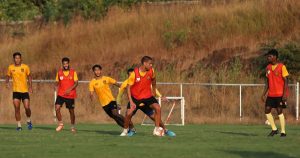 Hyderabad FC are back in action for the third time in ten days, as they host Jamshedpur FC in their first ‘home’ game of the season at the Tilak Maidan in Vasco on Wednesday.

While the ISL has seen a series of draws over the weekend, both teams come into the game on the back of contrasting form. Manolo Marquez’ Hyderabad FC are unbeaten in two games with as many clean sheets, and are currently fourth in the standings, while Owen Coyle’s Jamshedpur FC are ninth in the table.

The visitors have played two eventful games so far – a season opening 1-2 loss to Chennaiyin FC followed by a 2-2 draw against Odisha FC on Sunday. Interestingly, they played both these games at the Tilak Maidan, while Hyderabad FC who will play their first ‘home’ game step foot on the ground for the first time this season.

Coyle has some highly-talented names like Amarjit Singh, Narender Gahlot, Jitendra Singh, and Isaac Vanmalsawma at his disposal. The additions of Peter Hartley, Stephen Eze, Laldinliana Renthlei, Jackichand Singh and Ricky Lallawmawma bring in some solidity. But the form of Nerijus Valskis, the top goal-scorer in the league, with three goals in his first two games, could be the biggest threat for Hyderabad FC in this clash.

“For me, Jamshedpur FC is a strong team. They have very good players in attack, not only Nerijus Valskis. People speak about him because he is a very good centre-forward but for me they are one team who can score in all moments of the game,” Manolo said, speaking about the challenge ahead.

Meanwhile, Hyderabad FC come into this game on the back of a goalless draw against Bengaluru FC. While Manolo’s men put in a strong performance on the night, injuries to Lluis Sastre and Joel Chianese dampened a spirited outing from the club.

Giving an update on these injuries, Manolo revealed, “We don’t know the exact time for recovery. Chianese has a problem with his ankle ligament. Lluis Sastre has a muscle strain. For sure, they are not playing tomorrow. But we don’t yet know how long they are out for.”

However, there were plenty of positives to take from the game, as Hyderabad FC registered consecutive clean sheets and were comfortable in keeping Bengaluru FC’s attack at bay for most of that game.

Although satisfied with the performances so far, Manolo believes that there is a lot of room for improvement for his side. “We showed good character in the first two games. But it’s only two games. At this moment, it’s difficult to improve in defence because–two clean sheets and not many chances conceded. But you always have to improve. I think in the final pass, in front of goal, we can do better. We have taken many shots from 25-30 yards out, but I think we can take few risks in this part of the pitch and be more dangerous,” he added.

The game kicks off at 7:30pm IST on Wednesday, and will be telecasted live on the Star Sports Network with live streams on Disney+ Hotstar and JioTV.